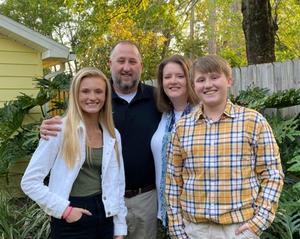 Westminster Christian Academy’s Head of School, Mr. Scott Davis, is pleased to announce the appointment of Coach Jim Stomps as the new head football coach for Westminster Christian Academy Lafayette. “We are thrilled to have hired a man with both the specific football experience we need and the love of Christ that will be an inspiration to others. I’m looking forward to a great start to football at WCA Lafayette!”

Coach Stomps brings 25 years of coaching experience to the table, with two of those years at the collegiate level. He will lead the new upper school football team at Westminster Christian Academy Lafayette, with the goal of building a successful football program while also developing young men of Christ-like character. “I am honored to be selected as the first head football coach at Westminster Christian Academy Lafayette. It has always been a dream of mine to have the opportunity to start, build, and develop a football program. I am looking forward to meeting the players and families of WCA and sharing my vision for the future of WCA Charger Football.”

Originally from Alabama, Coach Stomps served in the Navy for four years (1990-94) after graduating from high school. In 1995, he began his career as a teacher and coach while pursuing a Bachelor of Science degree in sports science.

For the past six years, Stomps has been the head football coach for Christ’s Church Academy (CCA) in Jacksonville, Florida. During that time, he led his team to the SSAC Football State Playoffs for six consecutive years. In 2019 and 2020, Stomps was recognized as a finalist for Independent High School Coach of the Year. The 2020 season was filled with many accomplishments. Stomps was named Jacksonville Jaguars High School Coach of the Week for the second time in four years, served as head coach for the Gatlinburg All American Bowl All-Star Game which was comprised of players from all over the state, and celebrated an undefeated regular season with his CCA football team.

After many team and personal achievements, he’s equipped with the knowledge and experience to build a new football program from the ground up. “The future success of the football program will be due to hard work and a team-first concept that will be shared by both players and coaches alike. To achieve success, we must build our program on a strong foundation and that begins with putting Christ first. In everything, we do in the classroom, on the field, and in town, we will always strive to honor God with our words and actions. Charger football will be a program that WCA administration, teachers, staff, and parents can be proud of.”

Coach Stomps has been married to his wife Emily for 24 years and they have two children, Hannah (18), who will be attending Florida State University next year, and Brock (13). “My family and I are looking forward to meeting everyone and becoming part of the WCA family.”