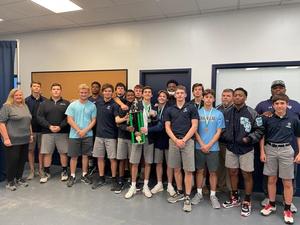 The Opelousas track team fought against the cold and wind on Friday, March 19, as they competed in the Bobcat Relays in Eunice. Despite the weather, the Westminster boys track team endured all the way to the end and came away with a huge win.

The Bobcat Relay was the largest competition hosted by Eunice in quite some time as 16 teams joined the meet.

Points were hard to earn, but the boys scraped together enough to come out on top. Led by two victories (800m and 1600m) from Nick Olivier and another from Evan Bergeron (shot put), the boys put themselves in position to win. However, it was not until an outstanding race in the 4x400m relay to end the evening that the win was secured. The 4x400m relay came away with the bronze medal after finishing third to earn six points. The final margin of victory in the meet was only four points.

Head Coach, Michelle Davis said, “It’s nice to see that a school our size can achieve a big win. Our athletes, men and women, work hard every day and we give the glory to the Lord. We aren’t finished yet. When enough athletes come together, where every point matters, we will see more success this year.”

Even though the win was sweet, the team did lose several points when the WCA winner of the 110m hurdles was forced into a move in the middle of the race that resulted in a DQ. That was 10 big points that the team did not receive yet they were able to overcome in the end.

The parish track and field championships will take place on Tuesday, March 30 and both the boys and girls teams should be in the thick of it for top places.

Earning Medals at the Bobcat Relays: